Sidebar Sidebar
You are using an out of date browser. It may not display this or other websites correctly.
You should upgrade or use an alternative browser.
After three weeks and 36 matches played in the PCS 2020 Summer Split, the ranking is shaping up nicely with Taipei J Team (JT), PSG Talon (PSG), and ahq eSports club (AHQ) racing for the top two spots as the gap between these teams and the rest of the league begins to widen.

JT started Week 3 undefeated but had their streak ended by Spring Split champions, PSG. Their match was touted as the featured match of the week and it did not disappoint. Despite the defeat, JT bounced back to win their Sunday matches against Hong Kong Attitude (HKA) and Liyab Esports (LYB) respectively. They remain at the top of the ranking ahead of PSG, who only played two matches this week but won both in emphatic fashion.

Berjaya Dragons (BJD), who finished in fourth place in the Spring Split Regular Season, started their Summer slowly, coming into Week 3 with 1W4L record. They registered their second win of the split at the expense of Alpha Esports (ALF) on Saturday, showing glimpses of their old-self, but was defeated by PSG in an unexpectedly one-sided affair the following evening.

BJD’s Southeast Asian rival, Nova Esports (NOV), had a great weekend despite losing to the Spring Split runner-up, Machi Esports (MCX), on Sunday. A confident display against LYB in the first match of the week followed by a surprise victory against high-flying HKA demonstrated the vast improvement made in their performances.

Meanwhile, HKA, who was responsible for PSG’s sole defeat in Summer so far, came crashing down after their failure to register a single win this weekend. Their confidence was shaken by NOV, and JT took full advantage of it. Two other teams that failed to improve their winning record this week were LYB and Resurgence (RSG).

AHQ may have slipped up on Week 2, giving LYB their first win of the split, but they made no mistake when playing against RSG. It was an almost-perfect game, if only Shinsekai hadn’t taken a turret. AHQ’s second win of the week came against MCX in the final match of the week, one that could have gone either way if not for scintillating performances by Kongyue, Leaky, and Uniboy. 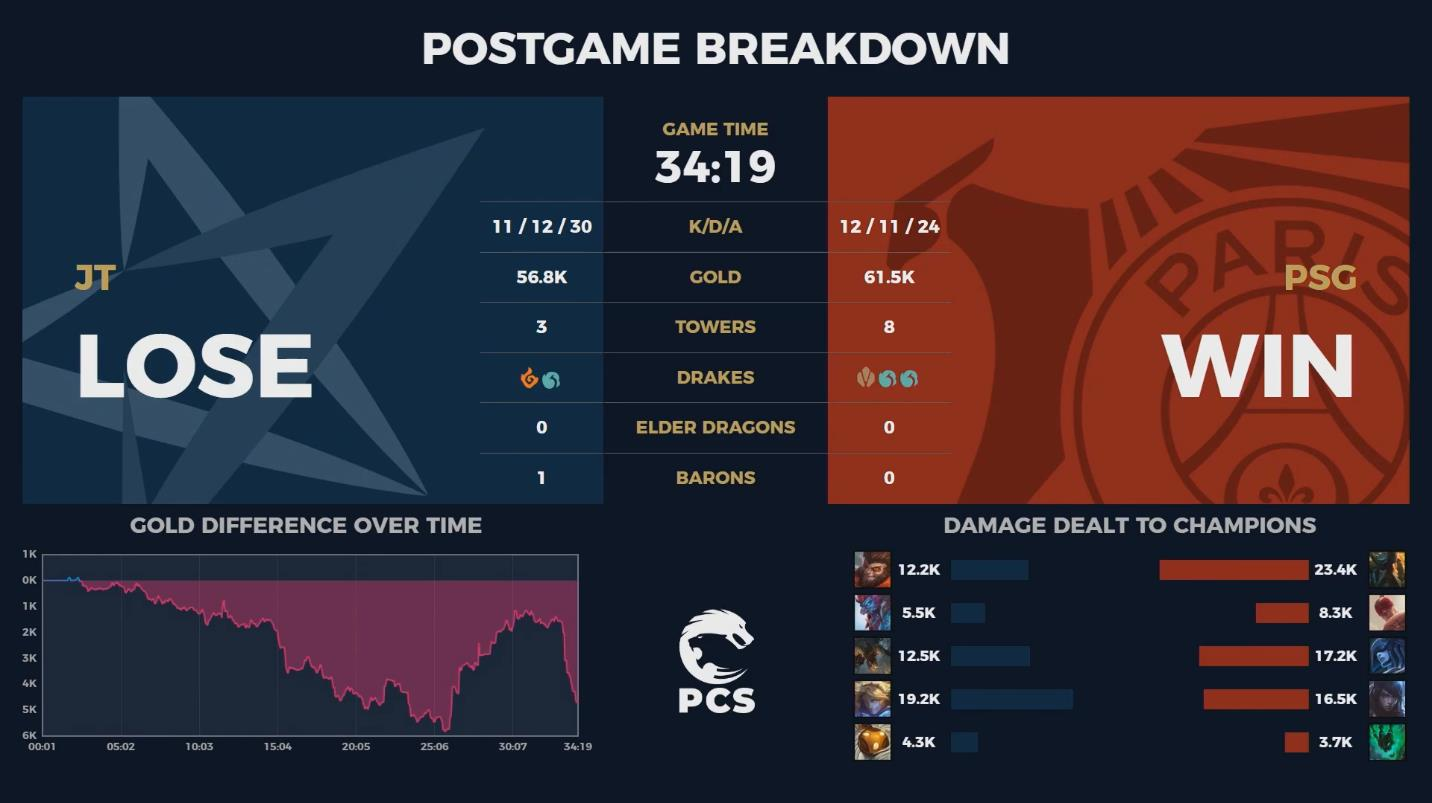 Our featured match of the week turned out to be a feast for PCS fans. Only one kill and an additional drake separated the two at the end of the match, but it was down to PSG’s clean team fights that pushed them to the finishing line (or Nexus). All of PSG’s players, other than Kaiwing, registered three kills while JT Lilv was rendered powerless at the end of the match despite his 5/1/3 KDA.

Player of the week - JT Lilv Despite losing to PSG, JT Lilv had a great weekend in his AD carry role, with a KDA ratio of 12. His performances in Summer have vastly improved in comparison to his team’s uneventful Spring Split. His current form could be a massive contributing factor if they are to qualify for World Championships 2020.