Sidebar Sidebar
You are using an out of date browser. It may not display this or other websites correctly.
You should upgrade or use an alternative browser.
I knew the game has potential, but I never thought that this day would come. I can still remember playing this game back when it was first released on Play Store with a huge amount of bug. Well, here we are talking about the latest trending mobile game that most of us and our friends are playing right now.

​
Yeah, I know. Just look at those cute-looking bean-sized characters. Behind those colorful designs lies at least one to three impostors that are ready to chomp your head or break your neck. Before we get into it, let me properly introduce the game. 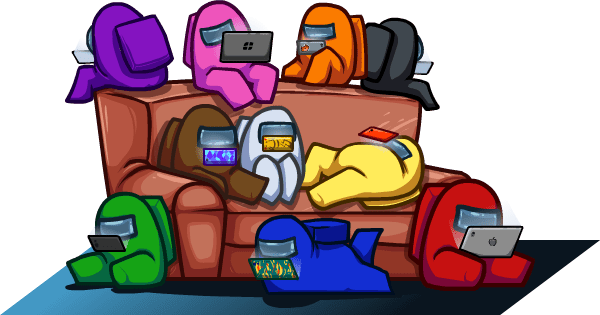 ​
Among Us is a cross-platform game. It's available on Steam for PC, Google Play Store and App Store on Mobile. I'll provide the links down below. If you want a better view and controls, you can buy it on Steam for PHP 159.95. As for the mobile versions, it's FREE. ​
The mechanics are simple. You hop Into your friend's or a stranger's lobby. The number of people, the settings, and the map will all depend on your host. So if you have a personal preference, it's better to host your own lobby. The roles will be randomly given at the start of the game. Shhhh!

First off, the crewmates. They will always have the highest count since they're the prey of the impostors. If you're a beginner, being a crew isn't that fun at first. You'll get killed A LOT of times before you get the hang of it. I'll provide a guide below on how you can survive and be an efficient crewmate before you all get killed or wrongly suspected by the group.

​
As a crewmate, you only have three things to keep in mind - SURVIVE, FINISH TASKS, AND FIND OUT THE IMPOSTOR AS FAST AS YOU CAN. Well, finishing the tasks to victory is nearly impossible without anyone getting killed. So that fastest way for the crew to succeed is to deduce and kick the impostors as fast as they can.

You probably know what you need to do here. Your few numbers don't matter if you have the power of killing, trapping, sabotaging, and even create lies to kick the crewmates out. Just don't get caught on the murder scene or get suspected by a lucky guess. Or else, you're on your way to space just like the image above.

THE GUIDE
​
I was playing this since last year and I'm here to share my experience with you. If you're a true player who doesn't quit at the very beginning just because you didn't get the role of an impostor, then I truly commend you for being an honest crewmate.

When I first played the game, I knew the huge disadvantage of crewmates at first glance. So I experimented on it and finally found the solution -PROPER HOSTING. Being a host grants you the ability to change the settings of the game and balance the power between the two sides.

​
With 10 people in the lobby, these settings are balanced. Depending on the number of impostors, you'll need to adjust the number of emergency meetings, visions, cooldowns, and voting time. I won't explain how the whole system works, but you can still experiment in those settings. Just remember that visions and cooldowns are the vital parts of balancing the game. ​
As a crewmate, it's better to have a friend inside the game. Well, ironic isn't it? This game is made to destroy friendship. But, I mean it. If he's a crewmate too, then you can apply the buddy system. You walk around together. One of you will do the task, the other will watch your back. In that way, the impostor will have a hard time to kill either of you. This is helpful especially in critical sabotage made by impostors.

Memorize how to finish the tasks so that you can go in and out quickly. And always hit the ground running. If you frequently move, chances are you're going to bump into other crewmates and lessen the probability of getting killed in isolated places. Finishing all the tasks will give you victory. And as crewmates, always remember, "apes together strong". ​
What you're seeing above is what you'll basically do - KILL. You're like the walking death god of this game. Although limited by cooldowns, your power within the ship is vast. From closing doors to sabotaging critical components of the ship, when you use them wisely, you'll win in a matter of few minutes.

Where's the guide? Do you still need a manual in becoming the biggest maniac in the game? Of course. Stay close to vents whenever you're strolling in the ship or doing tasks. Speaking of tasks, DO TASKS. To avoid full suspicion, let them see what they want to see. Even help them from the sabotage to gain their trust.

​
Now, what you're looking at is my favorite place to sabotage - THE REACTOR. It's a critical component with a pressuring timer that will surely put all the crewmates in panic. If you're being merciful, you can go for the Oxygen Depletion.

And just like the crewmates, the principle of "ape strong together" does also apply to you. If impostors act synchronously, you can kill two people at once or even create convincing lies before anyone can even rebut to suspect you back. Lastly, never forget the basic rule of an impostor - NEVER GET CAUGHT.

CONCLUSION​
All of these may seem easy to do. But when we're already facing the reality in-game, it's actually hard to remember or master these things. And always remember to become a true player. DO NOT quit the game just because you didn't get the role of an impostor. Whenever I play as a crewmate, I imagine myself as Detective Holmes who needs to quickly deduce before it becomes my turn to get killed. ​
For those who are interested to play the game, here's the link for Steam for PC. For mobile users, here's the link for Play Store and App Store. All images are credited to Innersloth, the creator of Among Us. Let's all enjoy the game and, hopefully, no friendship will be literally destroyed by the game. Cheers!
Click to expand...