Sidebar Sidebar
You are using an out of date browser. It may not display this or other websites correctly.
You should upgrade or use an alternative browser.
How is your dailies going? With no event and the game giving us free sanity pots everyday, I am sure you have prepared a squad for the incoming Contingency Contract but let's not talk about that for now, we have an event coming up before that so this will really help you with more rewards pouring in to prepare your operators at their top game. Let's break down the incoming update that Arknights about to give us! From a new event to new costumes and furniture sets, it looks like another huge drop will be given to us!


Level and Sanity Increased
If you have been stuck at Level 100 for a long time now, rejoice as it has been expanded to 120, now you can level up 20 more times to show your dedication to the game. But don't fret, not only your dedication is rewarded but also your sanity count. From 130 to 135, your sanity will be increased with the new levels that are coming on the way. Don't think of it as a little something, even 5 sanity which would cost about 30 minutes of your time can lead to great results if you time it well. Extra stages can cause level ups, you know so get to it!

No more OP Limit in Refilling
If you are a massive whale or you just got a lot of Originite Prime to spare then refilling them with sanity is always an option for players who want to spend an entire day playing Arknights. But back then, the problem was the game only allowing you to spend a maximum of 10 OP before hindering you to stop and take a rest.

Not anymore, after the next update, the restriction will be going away and you can refill it as much as you like. Sounds like grind will be real for those dedicated on their operators!

Code of Brawl
After a week break from Heart of Surging Flame, it is time for another event. You may ask while the daily Sanity Pots and Supplies and Chip Nodes are open, yes! But don't worry this won't be as grindy as HoSF so you can rest easy. Anyways, Code of Brawl will run starting May 27 until June 10. The goal is to collect Top Tier Penguin Medal by clearing stages and use them to buy various rewards from the shop. Sounds simple right? Good, because we will also be getting another operator for free in the event. Clear CB-5 to get 5 * Operator Bison! The event once again will be split into two parts. Part 1 which is the main story mode will be unlocked when the event goes live, while the other stages or the EX stages will be unlocked in June 3. Rewards are available until June 17 so don't worry about claiming the rewards quickly.

Limited Headhunting - Keeper of Lock and Keys
Blue Exusiai? Well, that's what you see there, but it's Mostima! Players love her as she is considered as an Arts Schwing Schwing which leaves me intrigued. She is hyped up in the EN server so expect a lot of people dropping their orundums for her. Same goes for me, I'll try to get her, more power to my roster and all. Other than Mostima, it seems lilke Firewatch and Waai Fu (yep, you heard that right) together with May will be on rate-up in this banner, so if you like someone there, go get em!

New Outfits
Firewatch and our Rich Catgirl, Jessica will be having new outfits for us to enjoy with. The Vitafield [Rewilder] collection will be up and both Jessica and Firewatch will be featured. Ash for Jessica and Wilted Cypress for Firewatch. New Furniture
Who does not like a snazzy dorm, I certainly like my operators to have their morale up and a place to chill while they are taking dangerous missions for our goals in Rhodes Islands. If you agree with me then better check these new furniture sets, some sets might fancy your interests! 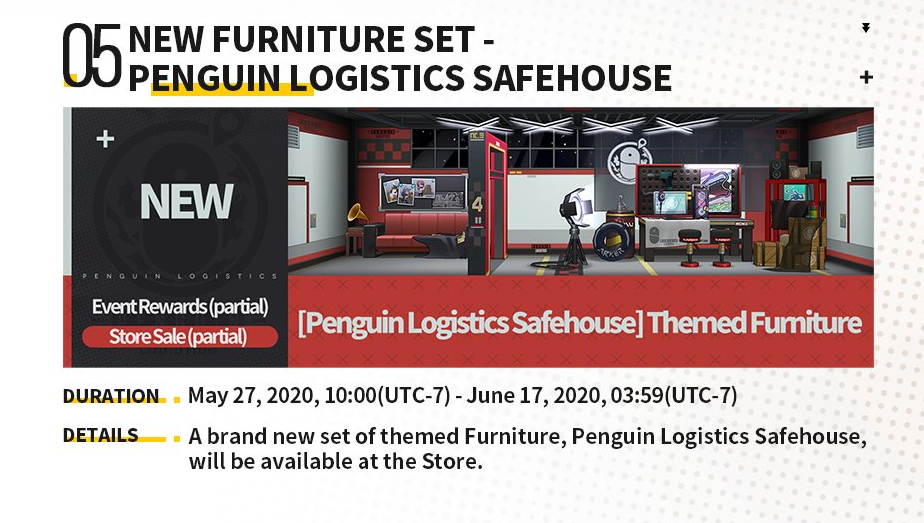 The new limited one, the Penguin Logistics Safehouse will be up until the claiming of the rewards are open so that will be until June 17, 2020. It has an awesome color scheme of red and white that may I say have some awesome design. I can see my Exusiai and other Penguin Logistics Operators to chill here and have some fun. If you like what you're seeing better buy it up before it's too late. Meanwhile, the duration for the Lucky Drop of the Sami Countryside Villa is over and if you haven't got the majority of the furniture, you can buy the rest in the furniture shop once it's up. The cozy design of the furniture is something to adore with. I think I had some lucky drops with this set? Time to mix and match them. Finally, while the old furniture set is now graduating, a new one is about to arrive, of course, a gacha game has to have some little more RNG-based things and I like free stuff once they drop. Presenting, Reimselar Ballroom! Might I say that looks elegant and grand, perfect for operators who like to move with class and style. Just play the game and get lucky with the drops. However, these are not available in Challenge Mode, Extreme Mode, Tutorials, Annihilation and Chips, so if you want them to drop, don't do it in these areas.


New Rate-up on Standard Banner
Been waiting for Apple Pie? Or maybe strong defenders like Hoshi and Nearl? How about Projekt Red and Lappland? Anyways, if you like either, or all of them, take a gander at the standard banner! Rateups are for Exusiai, Hoshiguma for 6 stars, Nearl, Lappland and Projekt Red for 5 stars. If you lack someone here and wish to get them, now's your chance! Conclusion
We are seem to be progressing quick to the game, which is a good thing, if we ever catch up to the CN Server then we won't be needing Clairvoyance EX and speculation for new events, we won't be spoiled and we will be at the same pace of CN which will be neat! Thoughts about this? Tell us in the comments below!
Click to expand...