Sidebar Sidebar
You are using an out of date browser. It may not display this or other websites correctly.
You should upgrade or use an alternative browser.
Top Clans 2020 Dota 2 group stages are well underway, and yesterday we saw four more teams enter the fray. For Group B, we saw for the first time teams Execration, Galaxy Racer, Neon Esports, and Vice Esports. This day’s matches were very competitive, and we saw great Dota 2 games throughout the whole group stage round. In the first series, Neon Esports took on Galaxy Racer. The two teams were evenly matched, neither team getting a clear advantage. The two teams traded leads and teamfight wins, which will also reflect the match score. Galaxy Racer took Game 1 as Neon Esports called GG after losing a crucial teamfight on the top lane. Then, Neon Esports dominated most of Game 2, before Galaxy Racer mounted a comeback, which Neon promptly put into place before it got out of hand. Neon and Galaxy score a win from each other, and both have something to prove by the time they face each other again in future matches. 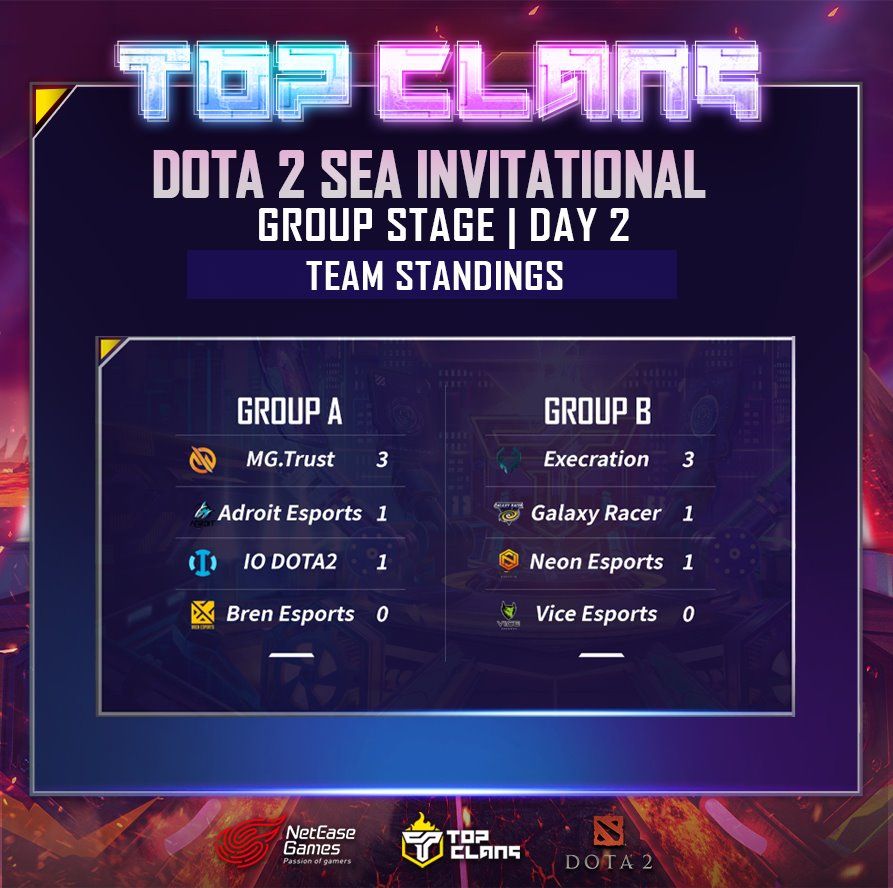 The Battle of Passions Continue On This Weekend

With the first round of group stage matches out of the way, we return today to the matches between the teams in Group A. We will see IO Dota 2 go against the all-female team Bren Esports, followed by a series between SEA Games 2019 champions Adroit Esports taking on the undefeated Motivate.Trust Gaming.

Tomorrow, we’ll see the continuation of the Group B matches. The teams will continue their matches until October 4, Sunday. After which, the teams will have a short break, and the action will continue next Thursday and Friday, October 8-9, for the final stages of the group stage.

After next week’s matches, the tournament will resume with the top two teams of each group in the playoffs. The playoffs will be a double-elimination bracket. The action will continue then on October 28, with the Grand Finals concluding the whole Dota 2 branch of Top Clans 2020 on October 30.

The Top Clans 2020 tournament continues on throughout the whole month, and fans of all five different games have the opportunity to watch competitive and high-octane action.

Unlike other tournaments of the same-caliber, Top Clans 2020 rewards the passion of the fans more actively. Aside from offering entertainment for everyone watching at home, keen-eyed fans can also win skins and cosmetics, just by watching the games! Mystery Codes will appear in the middle of matches, and players may send the Mystery Codes in the comments section of the livestreams. Every after match, lucky players are chosen to win cosmetics! Be sure to watch all of the matches to enjoy the passion of the players for the games, and also for more chances of winning prizes! Tomorrow’s games will start at 1:00 PM (UTC+8) with the match between IO Dota 2 and Bren Esports. All these matches will be live streamed on Top Clans 2020 official pages, on Facebook, Youtube, and Twitch. The live stream is also available in Thai language on the Top Clans Thailand Facebook page and in Malay language on Ancient Galaxy Esports Facebook page.