Sidebar Sidebar
You are using an out of date browser. It may not display this or other websites correctly.
You should upgrade or use an alternative browser.
miHoYo revealed on their official social media site their new playable characters in the Closed Beta Test of Genshin Impact. Arataki Itto and Gorou are expected to arrive in the 2.3 update. 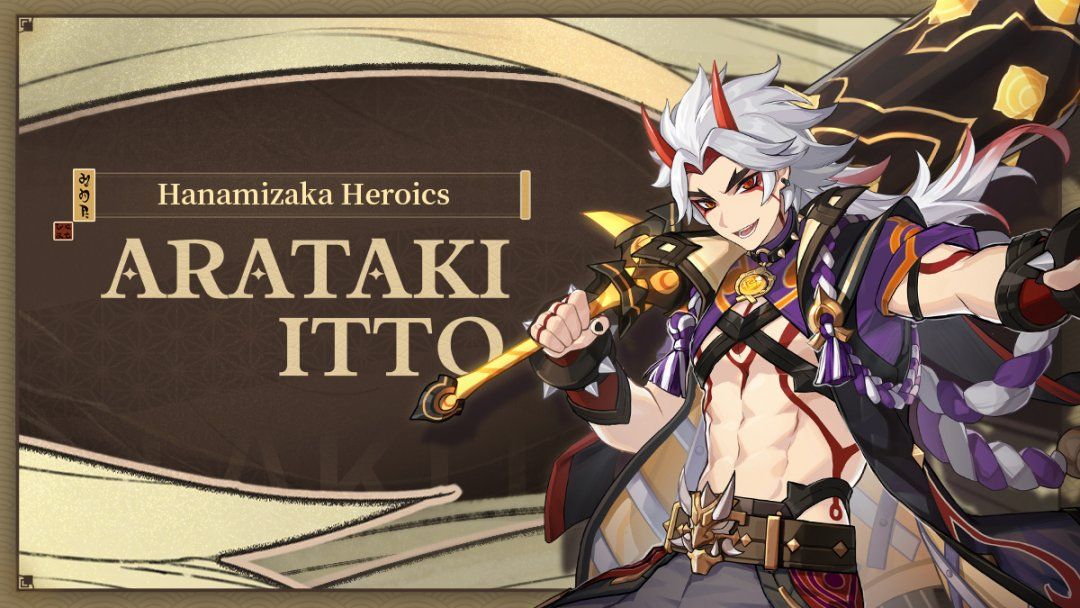 According to the leaks, Gorou is a four-star character while Arataki Itto is a five-star character. This means that they could both end up in the same gacha banner. The first part of the 2.3 update is expected to launch on November 24, this is also the date that Arataki Itto and Gorou are expected to be part of Genshin Impact’s playable characters. But if not, then they would be available after three weeks from November 24.

Arataki Itto is already quite well-known in the game since he's been mentioned several times in-game with voiced lines. He has Oni blood, which is one of the fantastical races living in Inazuma. Itto’s background as an Oni is based on the typical anime reference where they are portrayed as rowdy individuals but not automatically evil.

Itto is a Geo character as well as Claymore wielder. He leads a gang and uses a club as his weapon, which is one of the classic weapons used by Oni in Japanese folktales. "Hello, I'm Kuki Shinobu, deputy of the Arataki Gang. I handle the affairs of the gang. If you come across any inappropriate behavior on the part of our boss, Arataki Itto, please contact me immediately. Here is my business card." — Kuki Shinobu
◆ Arataki Itto
◆ Hanamizaka Heroics
◆ The First and Greatest Head of the Arataki Gang
◆ Geo
◆ Taurus Iracundus
Click to expand... “Fast as the wind and mighty as thunder, he is an intrepid man with Oni blood running through his veins.
His key traits would be his striking horns and piercing voice that never goes unnoticed.
He is an untamed soul who is wild and free, that even a person with the boldest imagination can be surprised by him.
His heroic spirit and ardent heart guide him wherever he goes.
His happiness is exuberant in each and every passing moment!
Have you heard of the Arataki Gang before?
No? No problem, from today on, we are now acquainted. We are the Arataki Gang of Hanamizaka. Of course, you must be introduced to our most prominent leader: Arataki Itto!”
Click to expand...

Meanwhile, Gorou is already familiar to everyone since he already appeared during the Inazuma Archon quest but at that time he isn’t playable yet. A new Kazuha dialogue has also been revealed that pertains to Gorou. New details regarding his personality and background has also been released. "Kindness and loyalty are the representation of virtue. Without a doubt, my friend Gorou is a virtuous general." — Kaedehara Kazuha
◆ Gorou
◆ Canine Warrior
◆ General of the Watatsumi Army
◆ Geo
◆ Canis Bellatoris
Click to expand... “A loyal and brave general of Watatsumi island. Born with a beast-like fighting intuition and tenacious will, he can find a way to victory even in the most critical moments.
He leads the Watatsumi troops, who have far fewer military resources compared to the Shogunate. Gorou strives to ensure that the inhabitants of this island will live in safety and peace.
Outsiders may not be able to imagine that Gorou, someone who faced thousands of enemies on the battlefield, is actually very affable and gets along with all his subordinates.
In Gorou's eyes, the people around him are not only his brave soldiers, they are also his beloved companions. They are like treasure to be cared for and protected. The land that sustains us, the comrades who support us, the faith that encourages us to move forward... These are the most precious things for Gorou, to whom he devotes his loyalty and courage.
Within Gorou exists a soul as vast and reliable as the earth.”
Click to expand...

While you wait for this new husbandos, Genshin Impact’s Version 2.2 update “Into the Perilous Labyrinth of Fog” is already here with a Childe banner rerun. The new character Thoma will arrive in the second banner.
Click to expand...