Sidebar Sidebar
You are using an out of date browser. It may not display this or other websites correctly.
You should upgrade or use an alternative browser.
The final weekend of PCS 2020 Spring Split saw Talon Esports (TLN) take home the first-ever PCS Championship after beating hot-favourite, Machi Esports (MCX) in gruelling five-game grand finals. TLN made it into the Grand Finals through the Lower Bracket by defeating ahq eSports club (AHQ) in the Lower Bracket Finals on Saturday. Hong Kong Attitude (HKA) was eliminated on the same day by AHQ.

HKA’s miracle Playoffs run came to an abrupt end when faced against one of the favourites to win the league, AHQ in the Lower Bracket Semifinals. HKA 3Z, who carried the team in their previous series, couldn't repeat the feat as AHQ Ziv nullified 3Z’s late-game hyper carry champion, Vladimir in Game 1. The veteran top laners were involved in a bloody Game 2 as Ziv and AHQ pulled all the stops to end the series with 25 kills over 9, with Ziv being involved in 16 of those kills.

There was no time for AHQ to celebrate as they had to reset and prepare for TLN later that night. These two teams met 3 weeks ago in the Upper Bracket Round 2 that ended with TLN’s sensational reverse sweep of AHQ. Although there was no reverse sweep this time around, however, TLN had to dig deep to come back from 2-1 down to win two games back-to-back to knock AHQ out of the competition. Despite their best efforts, they took a risk by fielding AHQ Apex and benched Uniboy after losing Game 1. The gamble almost paid off, if not for TLN River’s mind-blowing Lee Sin ultimate, the Dragon’s Rage that caught AHQ Wako at the backline and sent him flying to his demise, alongside with AHQ’s hope of defeating TLN.

Ahead of Sunday's Grand Final match, PCS casters and analysts favoured Machi Esports over Talon Esports for their predictions, raising eyebrows despite the fact TLN was close to beating MCX two weeks ago in the Upper Bracket Finals that ended 3-2 for MCX. That defeat sent TLN down to the Lower Bracket but they managed to secure a rematch and were determined not to lose in Game 5 again.

All seemed to be going well for TLN after they took the lead in Game 3 but MCX refused to let up and forced the championship tiebreaker. At this point, TLN would have played 22 games out of 23 available in the playoffs for them in comparison, MCX had only played 12 games. The long and arduous road finally paid off for TLN as they pushed into MCX’s Nexus for one last time and earned themselves the title of the first-ever League of Legends Pacific Championship Series winner.

The final series of PCS 2020 Spring Split saw the rematch of MCX vs TLN that went all the way to Game 5 two weeks ago. They did not disappoint as MCX took first blood in tightly contested Game 1 thanks to MCX Mission living up to recent praise given by his opponents and analysts, touting him as arguably the best player in the league. He went deathless with seven kills on one of his pocket picks, Corki, to carry his team to victory while earning the MVP of Game 1.

That sort of performance by MCX star player prompted TLN to respect his ability and banned four mid lane champions to force Mission to play Orianna. Evidently uncomfortable to play this champion, his weakness was soon exposed by TLN Candy. The Korean mid laner on Pantheon landed all his combos on his opponent and solo-killed Mission at the 3rd-minute mark. Mission had to rely on his teammates to step up and share the burden of carrying the team. Bruce on Miss Fortune was a constant threat to TLN but it was his bot lane partner, Koala that made a grave mistake during the Elder Drake fight that cost them the game. Koala on Blitzcrank hooked Hanabi’s Renekton and exposed his backline. Hanabi’s AOE damage swiftly softened the carries around him and allowed his teammates to focus on the isolated Orianna. While TLN maintained a minor lead throughout the game, they fully capitalized on the mistake and tied up the series 1-1.

Game 3’s draft started off similarly with 4 mid lane champions immediately banned but MCX left Aphelios open for TLN Unified despite consistently performing at a high level with the champion throughout the split. Being on the blue side of the draft, MCX opted to prioritize Mission’s Syndra pick before more mid lane champions got removed from the game. The decision seems to be justified as Mission secured the first blood revenge on Candy but his aggression cost him dearly due to TLN River’s Graves being nearby to trade the kill. Candy continued to be the target, dying four times within the first 15 minutes to multiple MCX ganks. The early setbacks did not faze TLN’s determination as they hung on to scale towards the late game. River’s Graves managed to outjungle Gemini’s Rek’sai and remained a constant thorn to MCX while Hanabi’s Mordekaiser focused on removing Maokai to significantly weaken their team fighting ability proved to be the recipe to the success. TLN comfortably defeated MCX in Game 2 to go within one game of winning the championship.

MCX refused to go down without a fight and changed their picks and bans strategy by banning three ADC champions including Aphelios during the first phase. TLN repeated their bans on Azir, Corki, and Varus from Game 3 and picked Candy’s favourite champion, Le Blanc, available for the first time in the series. However, MCX strategy worked as they scale steadily while recovering from PK’s uncharacteristic deaths that helped feed Le Blanc. Unified was less effective on Miss Fortune and couldn’t get into a good position for Bullet Time. It was poised to be a low-kill game before MCX took the Mountain Soul that gave them the confidence to amplify their pressure on TLN’s base. They were patient throughout the game and it resulted in a victory that helped push the series into the final tiebreaker.

TLN going into the final game of the split has played 9 games in the past 24 hours with each game growing in importance that ultimately culminated in this championship decider match. They left nothing by chance by banning Azir and Corki for the 4th time in the series along with Syndra that caused them immense problems in Game 4. Aphelios was surprisingly left open for MCX while TLN opted for Varus for Unified. The draft from TLN showed they planned to win the early game, something that it is not synonymous with their usual playstyle that often seems to lean towards winning late-games instead. Despite Unified's early death in the game, their intention and aggression were felt right away with Candy on Pantheon leading the way. His multiple ganks and pursuit that resulted in early kills managed to offset Mission’s CS advantage over him. MCX fate was sealed at the dragon pit as they attempted to take the Mountain Drake away from TLN, who is one Mountain Drake killed short of the Soul. Their failure to zone out TLN allowed River to rush into the pit with his Lee Sin and steal the Drake for the Mountain Soul. The fight that ensued resulted in a triple kill by Candy and PK’s final attempt to waste time was in vain as TLN pushed on to destroy the Nexus and celebrate their championship-winning moment. Player of the week - TLN Kaiwing

As a Support player, TLN Kaiwing flashy moments within a game of League of Legends often come from his impossible hooks. However, his true quality is his game awareness and ability to enable his partner, Unified to shine with ADC champions. His consistency throughout the split to perform at a high level did not stop on the crucial final weekend of PCS 2020 Spring Split. 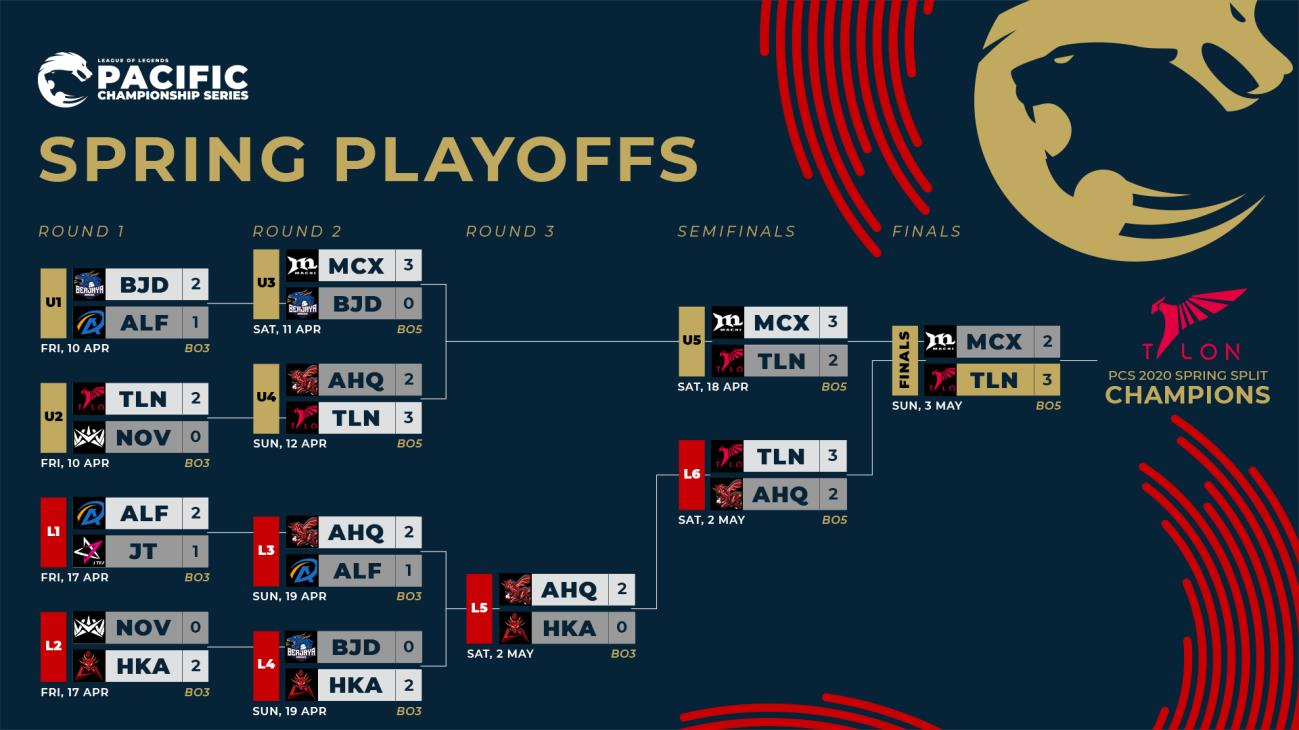 Legends of Runeterra Coins Now Available for Purchase on CodaShop