Sidebar Sidebar
You are using an out of date browser. It may not display this or other websites correctly.
You should upgrade or use an alternative browser.
Mobile Legends Professional League Philippines Season 5: Bren Esports Vs. Sunsparks - The battle of Champions

A play-offs quality match was showed by the season 1 champion, Bren Esports, and the defending champion, Sunsparks. Here is the game analysis and highlights of the game that can also help you to improve your Mobile Legends: Bang Bang knowledge.

Bans:
All of the banned heroes are very reasonable. They are generally part of the best heroes in the current META.

Bren Esports
Sunsparks
The line-up of Bren Esports is composed of 4 supports and 1 core which is Claude. Valir, Rafaela, Diggie, and Uranus are there to heal, provide crowd control, and protect Claude.

The line-up of Sunsparks is composed of Chou offlane, X.Borg support, Karrie marksman, Kimmy mage, and Khufra tank. This is a very standard line-up. The game was won by Sunsparks. Bren Esports relied too much on Claude which deals 37% of their overall hero damage. Sunsparks has Karrie which dominated the late game and quickly melt Uranus. The Uranus, and Karrie are respect bans from both team. Valir and Diggie are also normal bans.

Bren Esports
The line-up of Sunsparks is composed of close to mid range heroes. There are no marksman and tank but there are two fighters.

The line-up of Bren Esports has double marksman. Pharsa is the mage. X.Borg is an offlaner. Khufra is the tank. Even there is no support, Pharsa and X.Borg can still do the support role. Unlike Sunsparks, this line-up has no assassin. 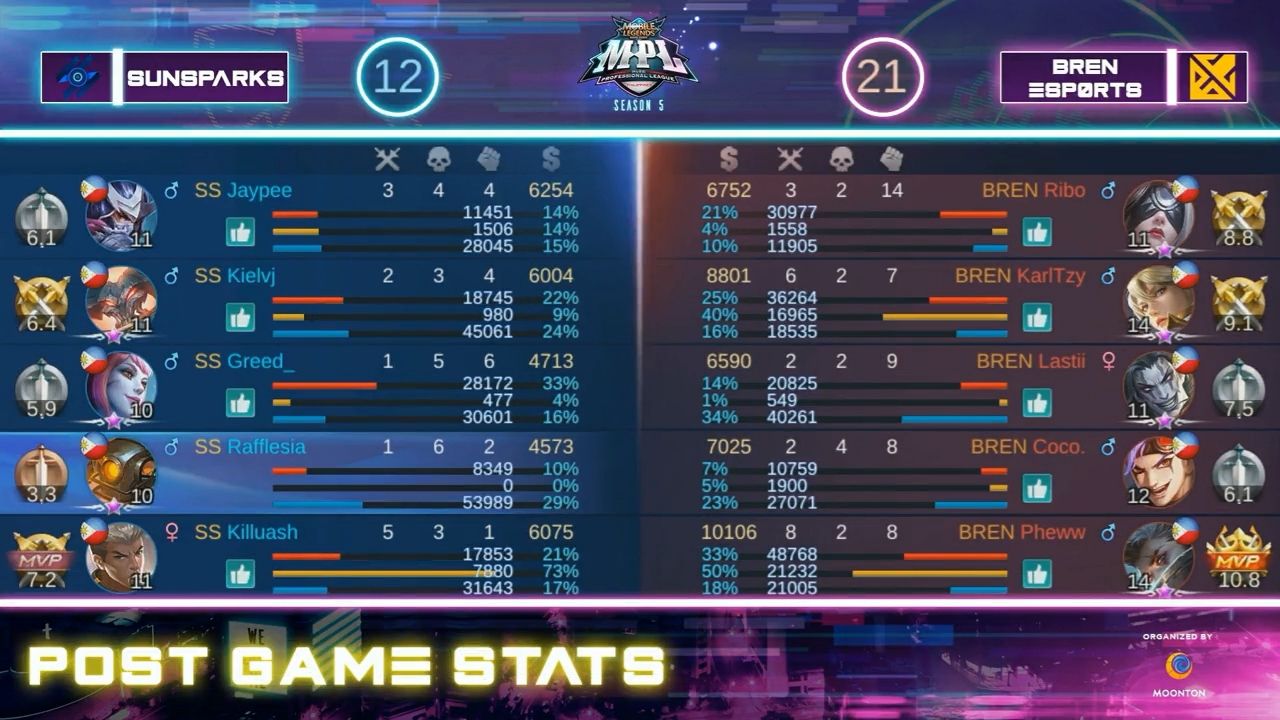 Bren Esports won Game 2. One of the reasons is that the line-up of Sunsparks requires all heroes to dive to perform their combos. The composition of the line-up is the real problem here since their performance using their heroes are great. Sunsparks played well but they are outdrafted by Bren ESports. This led this series to a Game 3. Bans:
Chou and Claude are respect bans for this draft.

Bren Esports
Sunsparks
The line-up of Bren Esports is again has only one core. This time its Hayabusa. Though even with support emblem and build, Carmilla, Uranus, and Valir can poke enough damage.

The line-up of Sunsparks has no tank again. X.Borg and Kaja will serve as their main frontliner. Selena, along with the forementioned heroes, plays as support too. Pharsa and Karrie are the main damage heroes. Bren Esports won for a reverse sweep. Based on the post game stats, the damage from Bren Esports heroes are balanced. Carmilla, Valir, and Uranus give more than 20% of hero damage each. Hayabusa gives the most hero damage in terms of percentage which is 24%. But the MVP of this match is really Coco using Uranus. The way he used Uranus as an offlaner and his utility in teamfights is remarkable.