TITAN, TITAN Black, and TITAN Z: graphics cards that raised every bar and claimed countless benchmark records. Built from the highest-performing chips, the latest innovations, and premium materials, previous-generation TITAN GPUs made heads turn and instilled envy in every gamer. Now, there’s a new TITAN, one built for Virtual Reality and 4K gaming. With a faster Maxwell GPU and an unprecedented 12GB frame buffer, our new TITAN reigns supreme, outperforming all challengers. The name of this new champion? TITAN X. The ultimate GPU.


TITAN X is the ultimate gaming GPU, designed to tackle the latest games with ease, be that at 1920x1080, 2560x1440, or 3840x2160. Twice as fast and twice as energy efficient as previous-generation TITANs, and with double the memory, TITAN X lets you game at any resolution with all the effects cranked up.

TITAN X dominates our performance charts thanks to its expanded, faster Maxwell GPU, which boasts 3072 single-precision CUDA Cores, 3072 kilobytes of L2 cache, 192 Texture Units, 92 ROP Units, and a 384-bit memory interface. Compared to previous-generation TITANs, TITAN X has more of the key components that accelerate your framerate, in addition to a faster clock speed. 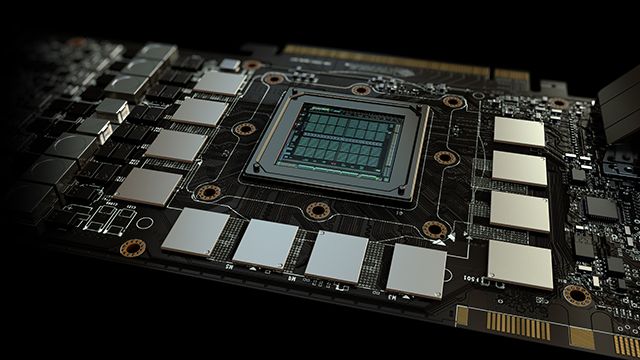 Thanks to our continual investment in R&D you can further increase TITAN X’s performance with Multi-Frame Sampled Anti-Aliasing (MFAA), a NVIDIA-exclusive anti-aliasing technique that produces an image that looks similar to high-quality Multisample Anti-Aliasing, yet is 10-30% faster depending on the mode and system configuration. Enabled automatically in compatible games via GeForce Experience, MFAA gives you faster performance for free, and the headroom to enable extra eye candy.


In addition to MFAA, our R&D has resulted in innovative advancements like Dynamic Super Resolution (DSR), which delivers 4K-quality graphics to 1920x1080 and 2560x1440 monitors, and our extensive library of NVIDIA GameWorks effects, which add immersive PC-exclusive enhancements to games such as Dying Light and The Witcher 3: Wild Hunt. Our most recent advancement is Voxel Global Illumination (VXGI), a lighting, shading, and reflection rendering system that approaches the level of fidelity, immersion and realism provided by Ray Tracing, the gold standard for rendering that’s used in your favorite animated blockbusters.

Unlike Ray Tracing, VXGI is specifically built for the capabilities of Maxwell GPUs, enabling it to run in real-time on a single graphics card. This you can see for yourself in the interactive Apollo 11 demo that debunks decades-old moon landing conspiracies by recreating the conditions, lighting and shading of the momentous event in near-perfect detail.


With TITAN X, VXGI is up to 29% faster than on the GeForce GTX 980 at reference clock speeds.
Now, VXGI is integrated directly into a custom brand of Unreal Engine 4, enabling developers the world over to dramatically enhance the visual fidelity of their games on PC. Click to load an interactive comparison exemplifying the qualities of NVIDIA VXGI.

Created by Quixel in Unreal Engine 4, the “Sci-Fi Hallway Scene” exemplifies the fidelity-enhancing properties of VXGI. Development of this scene was accelerated as the placing and tweaking of numerous individual light could be skipped, letting VXGI calculate and render light, shadows, ambient occlusion effects, and reflections.

TITAN X takes today’s most demanding games and scenarios in its stride, and at the recent Game Developers Conference (GDC) the world saw its full range of capabilities in next-gen experiences, too. Of those experiences, Virtual Reality (VR) is poised to be the next-big thing. Why? Because you’re immersed in the game in a way that was previously impossible. It’s you, directly in the game, with a real stereoscopic viewpoint, often with physical extensions of your body rendered on-screen when exploring and interacting with objects. It’s nigh on impossible to effectively describe, but once you try it you’ll be taken aback, gawping with wonder and grinning like a Cheshire cat. It truly is the future of gaming.

Unsurprisingly then, wherever you went at GDC jaws were dropping left and right thanks to the many VR demos, and powering the graphically advanced showcases from leading developers such as Crytek and Epic was TITAN X. Each demo was rendered on a VR headset with two high-resolution displays running at 90Hz, requiring a constant 90 frames per second, per screen, and TITAN X was the only GPU in town up to the task. TITAN X’s performance makes it equally adept at running next-gen experiences, like Epic Games’ Unreal Engine 4 Kite demo that demonstrates the fidelity possible in future games. Featuring fully dynamic direct and indirect illumination, cinematic-quality depth of field and motion blur, PBR assets, and procedural asset placement, Kite required astronomical amounts of power to render, and it was only TITAN X that could deliver when Epic were looking for a GPU to render Kite in real-time at GDC.


TITAN X is also primed and ready for DirectX 12, a new graphics API that will increase performance, enable the creation of more detailed worlds, and allow developers to create previously-impossible experiences. Imagine a strategy game with tens of thousands of individual units, a city builder with unparalleled simulations and AI, and worlds filled with thousands of buildings and objects, each uniquely textured. These possibilities and more await later this year.

Whether you’re exploring space in VR in Elite: Dangerous, robbing a bank in 4K in Battlefield Hardline, or prepping your system for future experiences, TITAN X has the performance and features to give you smooth, consistent frame rates, with industry-leading frame times. And if you somehow max out TITAN X, it’s compatible with 2-Way, 3-Way and 4-Way SLI, and forthcoming VR SLI modes where each GPU renders separate displays in VR headsets to improve performance and further reduce latency. If you want the very best you’ll want TITAN X. With more performance, memory, and features than any other GPU it’s the card of choice for enthusiasts demanding the ultimate technology to complement their X99 systems, VR headsets, and 4K G-SYNC monitors. If that’s you, you can buy TITAN X direct from NVIDIA today, and from our partners in the coming weeks. Upgrade your experience, get the ultimate TITAN.

Steam Cyberpunk SALE is up!