Sidebar Sidebar
You are using an out of date browser. It may not display this or other websites correctly.
You should upgrade or use an alternative browser.
The Mobile Legends: Bang Bang Women's Invitational will be hosted by MOONTON Games in collaboration with ONE Esports, a subsidiary of ONE Championship (MWI). The Mobile Legends: Bang Bang Southeast Asia Cup tournament format will be used by MWI. Teams from Cambodia, Indonesia, Laos, Malaysia, the Philippines, Singapore, and Thailand will be invited. Bren Esports, OMEGA Esports, IDNS Princess, IDNS Elsa, and Impunity Starlets1 are among them, with more to come.

How will the MLBB Women's Invitational work? Ten teams will be randomly assigned to Group A and Group B, and will compete against those in their own group. The top four teams in each group will advance to the playoffs, with each team being ranked according on the total accrued points from their respective matches.

The online competition provides as a competitive venue for women to demonstrate their skills as individuals rather than as female players. MWI players will be in the limelight of an officially sanctioned worldwide event with the theme #InControl.

Moonton and ONE Esports hope that MWI will provide a forum for women in the Mobile Legends: Bang Bang esports ecosystem to compete and demonstrate their abilities, passion, and achievements. The tournament will take place from January 27 to 30. Here is the complete schedule for each day up until the grand final.

Teams that will compete in the MLBB Women's Invitational in 2022 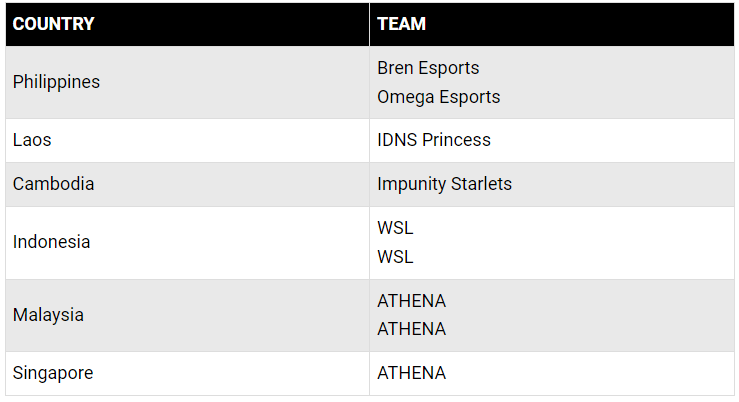 There will be teams from six countries competing, including Bren Esports, Omega Esports, IDONOTSLEEP (IDNS), and Impunity Esports. Due to a scheduling difficulty, Thailand's IDNS Elsa has withdrew from the competition.

According to ONE Esports' research, due to the widespread adoption of mobile phones and the development of the video streaming business, the female gaming and esports community is one of the fastest growing groups. Female gamers and esports fans now make for 49 percent of the Southeast Asian gaming and esports market.

"We're thrilled to begin off 2022 with such a significant event as MWI, and we couldn't be more thrilled to join with ONE Esports to bring this tournament to reality," said Lucas Mao, Moonton's managing director of global esports.

"Mobile Legends: Bang Bang Esports is all-inclusive," Mao continued, "with MWI allowing the existing cadre of female Mobile Legends: Bang Bang esports players to take charge of their fate and emphasize their abilities." Furthermore, we hope that the competition will motivate the next generation of players to follow in their footsteps — regardless of race or ethnicity. We're excited to join MWI in recognizing female strength and empowerment."
Click to expand...

"At ONE Esports, our purpose is to share and celebrate the stories of esports heroes that ignite the globe with hope, strength, dreams, and inspiration," Carlos Alimurung, CEO of One Esports, said. MWI was created to honor outstanding female heroes and provide them with a forum to display their abilities.

Winda Earl of GPX Ladies, who has been playing ML for about five years, sees the MWI as "a fantastic chance for female players who want to continue a career or adventure in esports."

"This event is a dream come true for me," she added, "because it allows me to demonstrate the community that the role of women in the esports industry has a lot of opportunity to develop."
Click to expand...