Visit site
The battle between Shikigami has made its way onto the chessboard! Use unique chess pieces to build various combos, and face off against your enemies in this battle of the wits!

First, we will introduce the rules of this new mode!
Also, please note that this is only the beta test version. If you have any questions or suggestions, please let us know so that we can improve this mode.

Basic Rules
There are 2 phases in OA Auto Chess: the preparation phase and the battle phase.

Step 1: During the preparation phase of each turn, the chess piece lineup in the chess box will refresh. (You may also spend coins to refresh the lineup.) Players can purchase chess pieces from the chess box and put it into their hand.

Step 2: Drag the chess pieces to the lower part of the board to initiate battle.

Step 3: When there are 3 of same Shikigami, you may fuse them into an upgraded version of that Shikigami by selecting “Upgrade” or dragging the chess piece in your hand to the same Shikigami on the board. Having stronger, higher-level pieces and making combos is a key to winning in Auto Chess.

Step 4: When the preparation phase ends, the chess pieces on the board will begin battle with the monsters or the opponent's chess pieces. 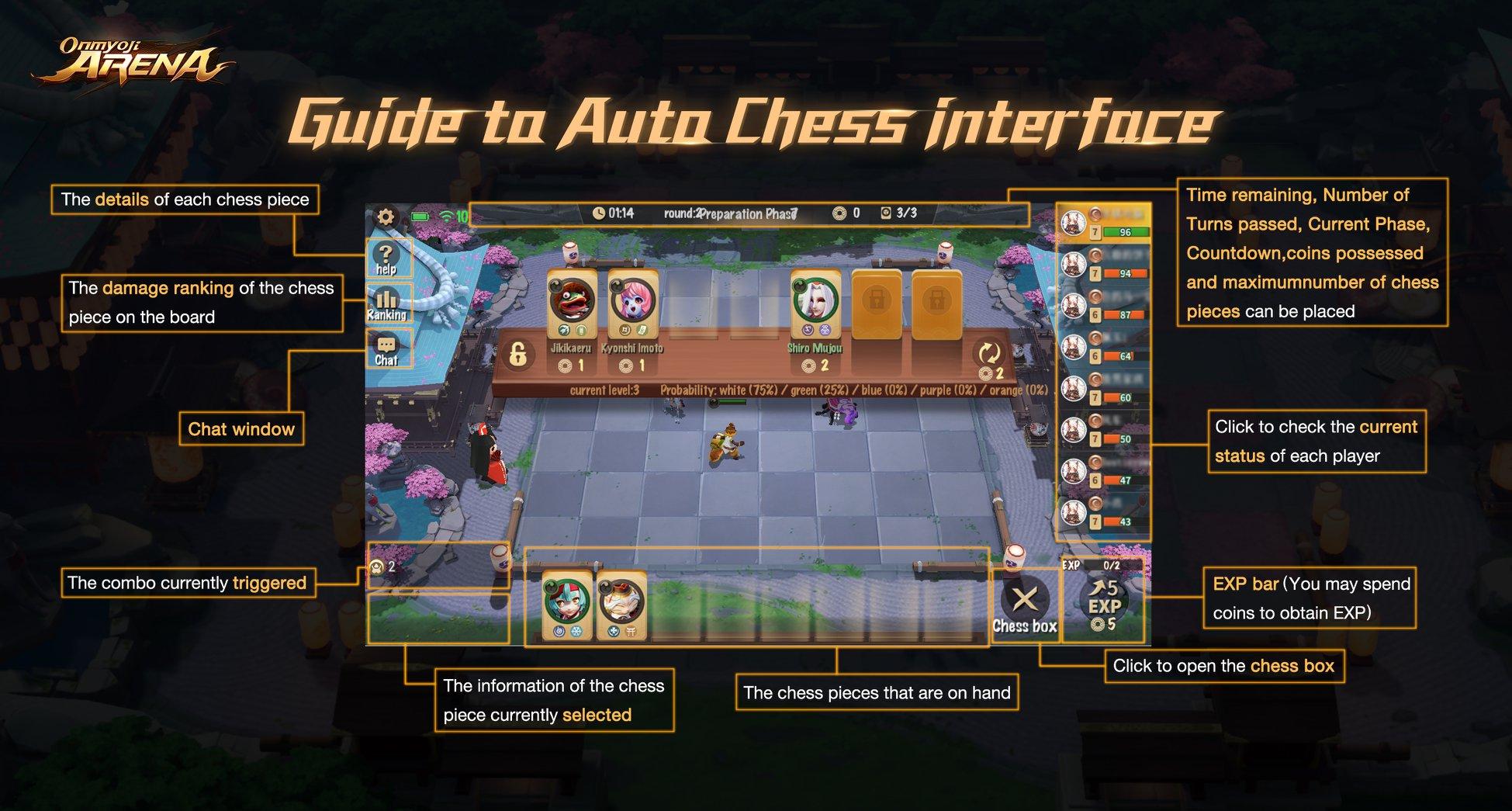 Players may obtain coins in the following ways:
Base income: Players will obtain a certain number of coins each turn. The amount of coins received will increase each turn. (At most 5 coins in a given turn.)

Interest: When a turn ends, players will receive 10% of their current coin total. (At most 5 coins in a given turn.)

Consecutive wins/ losses return: Players may receive up to 3 coins based on their wins or losses.

Chess pieces
The Shikigami in Heian-Kyo become chess pieces in this mode. Each chess piece will have one normal attack and one ability. When the energy gauge is full, the Shikigami's ability will activate automatically. (Some of the abilities are Passive Abilities, which will always be in effect). Each chess piece has a different role and race.

Life Points
When players lose a battle, they will take damage depending on the grade and level of the enemy chess pieces remaining on the board. Players will retire from the match when their Life Points reach 0.

Choose wisely when using Daruma to upgrade your chess pieces.

Froglet: This piece's role is All. Froglets are pieces that represent all roles. When a Froglet is on the board, it will add 1 to the combo for each role.

Please make use of the Froglets to enhance your combos.

Combo Effects
In battle, when players trigger a combo, they will also activate combo effects. Certain combo effects are more effective against certain pieces. Observing the opponent's combination of pieces and adjusting your own is one of the keys to success. Do you find yourself confused with the interface of OA Auto Chess? Worry not! We have prepared a guide for the OA Auto Chess interface!

After the update on April 30th, players will be able to enjoy OA Chess!