Sidebar Sidebar
You are using an out of date browser. It may not display this or other websites correctly.
You should upgrade or use an alternative browser.
Today, NetEase Games has revealed what's in store for the 4th anniversary of Onmyoji. Since the game's launch in 2018, the game has seen incredible success, with millions of active players around the globe uncovering the mysteries of the Shikigami. The 4th anniversary celebrations of Onmyoji will kick off on February 23rd and it will feature lots of special events, limited-time bonuses, and the introduction of powerful new Shikigami to the game, in the form of SSR Suzuhikohime and SP Ninja Yamausagi.

NetEase Games is proud to announce that the 4th anniversary celebrations for the award-winning Onmyoji will begin on February 23rd. The 4th anniversary event will introduce new SSR and SP summons, along with a number of other rewards for players who take part.

SSR Suzuhikohime is Coming to Onmyoji Onmyoji players have already been introduced to SSR Suzuhikohime in her incredible CG introductory trailer, which can be seen here. SSR Suzuhikohime is the wielder of a holy flame that can reduce all of her foes to cinders. The Saintess will be part of the Fiery Chime event, which will run from February 23rd to March 8th. Players can earn rewards by clearing different zones during the Fiery Chime event, which include the new Shivering Shadow skin for Orochi, Skull Daruma, SSR/SP Summon Scrolls, and Mystery Amulets. The guardian SP Ninja Yamausagi has shown her skills in an explosive CG introductory trailer, which can be seen here. The agile kunoichi protects the people of Hei-an Kyo from the shadows, silencing those who would do them harm. The Onmyoji 4th anniversary event will give players the chance to earn SP Ninja Yamausagi for FREE! On February 23rd, the Ninja Tricks event will arrive in Onmyoji and those who complete it will acquire SP Ninja Yamausagi.

Players Will Receive One Free Summon Each Day! From February 23rd to March 1st, Onmyoji players can perform one free summon each day, as the first Mystery Summon they perform will not consume any Mystery Amulets.

The Chances of Performing SSR/SP Summons Will Be Increased! 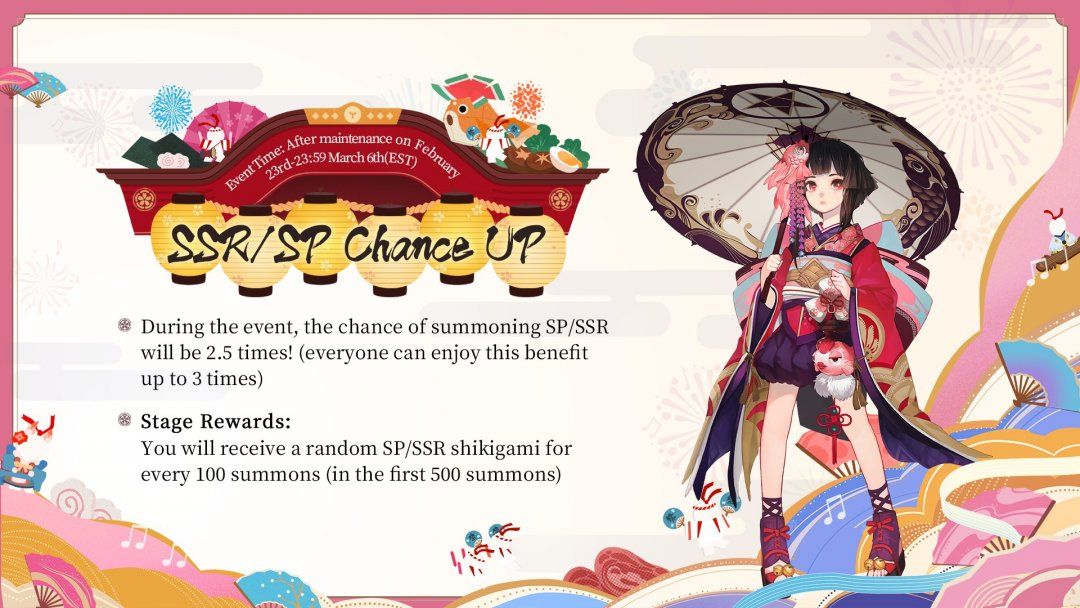 From February 23rd to March 6th, players will have a chance to receive a free Blessed Amulet during a summoning event. A Blessed Amulet can be used to claim any SP/SSR that is currently available.

The First Summon During the Event Is Guaranteed to Be an Uncollected One! From February 23rd to March 6th, the first SP/SSR summoned using a Mystery Amulet, Jade, or AR Amulet is guaranteed to be one that the player doesn't already possess! The 4th anniversary event for Onymoji will add new skins, including the Billowing Floret special edition skin for Seawatch Kingyo. The skin store will feature limited-time discounts throughout the event. In previous years, the Onmyoji Time Machine events have let players look back at their journey from the previous year, creating their own documentary that details their successes on the battlefield. The 4th anniversary of Onmyoji will have a new Time Machine event and players who participate can unlock the Graceful Serenity skin for Kagura, as well as a chance to earn random SP/SSR Shikigami for free!

From February 19th to February 20th, the 4th anniversary of Onmyoji will be celebrated at the Bankei Ski Resort in Sapporo City, Hokkaido. The Seimei Ice Sculpture Works will give fans the chance to see the world of Shikigami come to life. Check out the official Onmyoji social media channels to learn more.

Onymoji has seen incredible success over the past four years and it's all thanks to the fans. It's through your dedication and support that Onmyoji continues to thrive. The 4th anniversary event will give fans the chance to come together and share their passion for the game, and learn more about the ever expanding world of Onmyoji.

Call of Duty: Mobile Season 2 calls the Task Force 141 to report for duty