Sidebar Sidebar
You are using an out of date browser. It may not display this or other websites correctly.
You should upgrade or use an alternative browser.
In comparison with PC and console games, mobile gaming has been raking in hundreds of thousands of profits for the developers, especially now that different gadgets are made to keep up with the heavy byte of mobile games of today. With how accessible mobile games are, it's not really a question on why mobile games are one of the most profitable areas in the gaming industry. 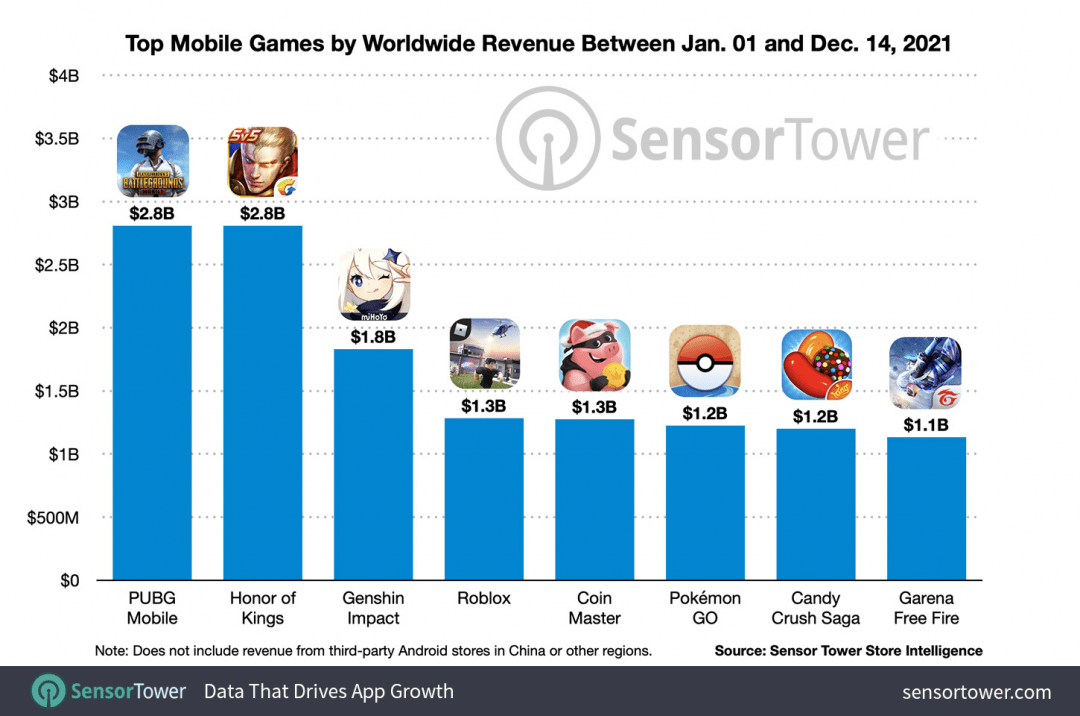 This year, the mobile market share continued to expand at a shockingly fast pace, with eight different mobile game titles surpassing more than $1 billion in total player spending between January 1 and December 14. Out of these eight titles, five titles have remained above that $1 billion threshold from last year. This data is according to the data insight platform Sensor Tower.


Many of the top games are popular titles that have remained successful throughout the years. These games have continued to thrive as more players spend most of their time glued to their gadgets. This includes games that have been known and played in PC or consoles and was given a mobile version to reach more players. Back to the data of Sensor Tower, PUBG Mobile and Honor of Kings are both tied at the top spot with more than $2.8 billion recorded for player spending. A successful feat for Tencent as two of its mobile properties were tied as the highest-grossing mobile games of 2021. This shows just how powerful the Chinese mobile game market is.

From November, PUBG Mobile was recorded as the highest-grossing mobile title recording a $254 million in total player spending, a 46% growth from the same period from November 2020, as per Sensor Tower. Around 66% of recorded revenue came from China.

Genshin Impact also had a strong year, with constant updates and its impressive visuals, the game got the third spot with $1.8 billion recorded in its total spending for 2021. This makes it the third Chinese published title in the list. Moreover, the game has generated a $2.4 billion in total earnings since the game launched back in September 2020 and was the second highest-grossing mobile title in November recording a $207 million in revenue, 36% of it came from China.

Roblox and Coin Master complete the top five with both recording a $1.3 billion player spending, showing a 20.3% and 13.8% year-over-year growth each. Pokémon GO, although missing the top 5, was poised to record its best year with more than $1.2 billion in player spending. Candy Crush Saga and Garena Free Fire also continue to be still massively profitable even years after its release recording a $1.2 and $1.1 billion revenue each.

With how the numbers are right now, it is plausible that we will see the total number of games grossing more than $1 billion reach the double digits in 2022. Then the question is, does this year’s top games will be the same next year or they will be dethroned?
Click to expand...