Sidebar Sidebar
You are using an out of date browser. It may not display this or other websites correctly.
You should upgrade or use an alternative browser.
One behalf of Riot Games Southeast Asia, we'll like to introduce Replication – an all new game mode with 5v5 mirrored heroes in the same team set to enhance the casual playing scene and offer novelty and unique-feeling gameplay. What were your goals when designing Replication?

“With Replication, we are looking to create exciting and novel moments by widening the player theorycrafting space while highlighting Agent abilities. Quintupling down on Agents that were balanced around normal Agent restrictions, we’ve created lots of hilarious near game-breaking plays for players to discover.”

What did you take inspiration from / any notable concepts you wanted to convey with Replication?

“We definitely took inspiration from League’s One-For-All mode, but there’s so much that’s different between our games - for example, our roster is a fraction of the size of theirs - that we needed to make a lot of decisions differently too.”

“I would call performance an EXPECTED challenge, but it was something we had to continually think about. We didn’t create our agents with the idea that five of them could be ulting at the same time!”

Also coming up will be the Tethered Realms Skin Line inspired by Sovereign and Forsaken in a classic juxtaposition of righteousness and corrupted darkness, exploring the contrast between Good and Evil, Darkness and Light.

Explore the tethered realms of Sovereign and Forsaken in this classic juxtaposition of righteousness and corrupted darkness in this skin line. 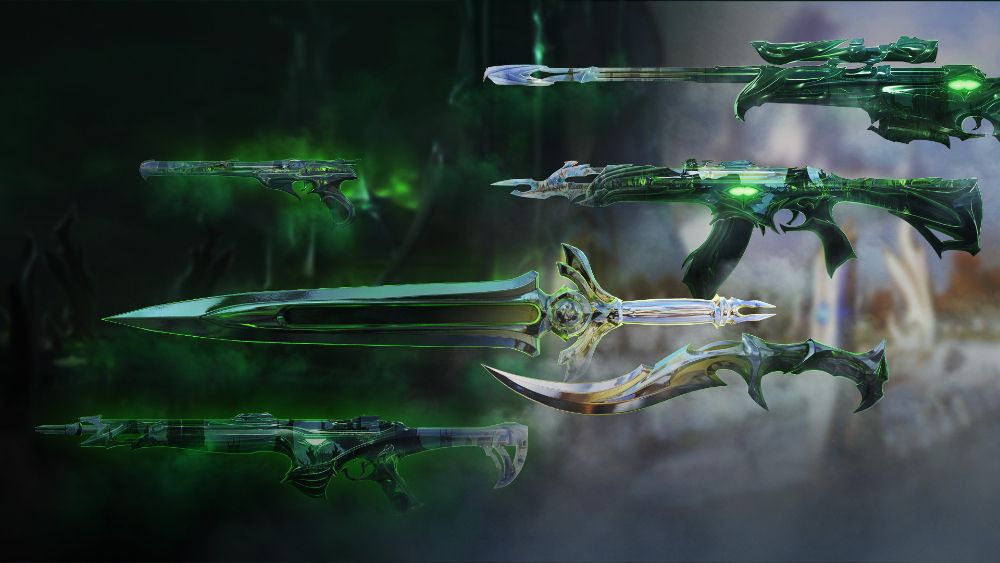 Good vs. Evil, Light vs. Darkness What were your goals when designing Tethered Realms?

Sovereign was one of the first skins we developed, and one of the first skins we made our own “internal skin lore.” We do this for a lot of skin lines to get the team to really understand the depth of fantasy that we’re crafting, so we come up with a world, a people, and an entire backstory for the skin to help us come up with ideas to push the themes as far as we can. With Sovereign and Forsaken, we wanted to play with these antithetical themes, playing into light vs dark. A lot of the world building that went into those skinlines was so exciting for us and we really wanted to show players what those worlds looked like, and where the weapons came from.

This was an opportunity for us to take some of that internal head canon from the team and share that with players, and we realized a perfect method to really showcase light and dark themes was with the same shader method we used in the Winterwunderland skins where the gun transitions between two scenes in sunlight and shadow on the maps.

What did you take inspiration from / any notable concepts you wanted to convey with Tethered Realms?

The idea for the worlds of Tethered Realms really pulls from the classic juxtaposition we see of good vs. evil in storytelling. We wanted to depict two identical worlds: one divine and one corrupt, taking inspiration from IPs like Diablo or Darksiders, and even Destiny, in the way they play with Light and Darkness.

We made the two depictions of the spaces similar because in our own headcanon for the worlds, they exist in different realities but to varying degrees. Imagine two separated worlds that have similar civilizations, and have gone through the same conquests and societal advancements. One thrives in a universe where the world is bright and the people are righteous, and in the other, the world is dark and and the people have become corrupt. The idea of these worlds being tied together was an interesting approach on how we take the idea of light vs. dark and spin it so that it isn't a battle between them, but rather a depiction of how one’s fate is tied to the other. Originally, we had this idea to try and take Sovereign and Forsaken and work them into a single skin. Some of the ideas were really crazy like having one of the skins slowly crack and warp into the other, but that proved to be a technical nightmare! We thought this was a unique opportunity to give players more of the “greenscreen” type of skins, and rather than use the default weapons, we would use the weapons from those first two skinsets to help tie the theme together.

Similar to when we made Winterwunderland, we wanted to try and find a way to have a really impactful melee that fits with the skins, and the opportunity came up to have dual wielding for the first time! This sparked a lot of conversations on the team around doing this more with mix and matching archetypes and other melees. This will just be a slow step in making our melee weapons more and more unique and we hope to keep building on this in the future.

What do you hope players will think of the Tethered Realms skin line?

We hope that players really enjoy this type of skin because it gives us opportunities to expand on the lore we create for our different thematic fantasies. We’ve only just started to show the full lore and fantasy of a skin through the player cards, and skins like these allow us to dive deeper showing the names, places, people, etc. of the worlds we create as a team. We would love to do this for more and more skinlines in the future.